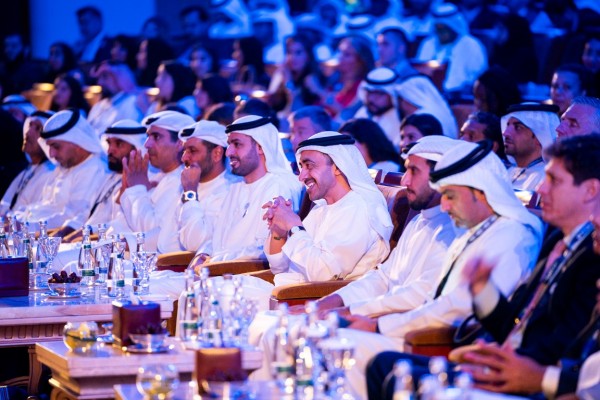 Pitch@Palace – the view from the Interpreter’s Booth

A special note of thanks to Viola Events who invited us to interpret at the event this year:

MC Maryam Amiri captivated the delegates with her vibrant manner and definitely deserves a mention:

The event received worldwide media coverage and we list a number of articles below: The winners are: Saif Al Darmaki, for Artelus, which is an AI start-up company that utilizes artificial intelligence to provide screening solutions for the ‘forgotten billion,’ a term reflecting the billion people around the world who do not have access to primary healthcare screening. Abdullah Al Shimari, for Foodate, an online-based smart system for Food & Beverage services. It provides high-end tech-savvy services through an eCommerce gateway, which includes business tools like customized eCommerce web/app, smart management tools and payment gateways. Hala Sulaiman, for Alrawi, a new application that looks towards enhancing digital capability through audio book creation and distribution of Arabic books translated to a wide range of languages. Alharith Al Atawi, for One GCC, which is a breakthrough app that helps match the skills of today’s line of job seekers with potential employers.

H.H Sheikh Abdullah bin Zayed said at the closing event: “The country believes in its youth and their potential to make a positive difference. Youth are the pillars of development, and any investment in encouraging their creativity, ideas and abilities, and equipping them with the right knowledge and guidance, will yield substantial results and contribute to the process of progress in the country.”

H.H added: “The wise leadership is making every effort to encourage young minds to innovate, think fearlessly and help in the smooth transition of the country into a post-oil era. In this context, His Highness Sheikh Mohamed bin Zayed Al Nahyan, Crown Prince of Abu Dhabi and Deputy Supreme Commander of the UAE Armed Forces, launched the “Tomorrow 21” – “Ghadan 21″ plan, the Abu Dhabi Accelerated Development Program, aimed at stimulating businesses and enhancing knowledge and innovation, giving the Emirate a competitive edge and bolstering its economic, developmental and social progress.”

Sheikh Abdullah also affirmed Abu Dhabi’s keenness to continue its pioneering role as a global hub of innovation and creativity by promoting entrepreneurship among citizens, providing support to ensure their success and creating a platform to implement their ideas and converting them into fruitful projects.

H.H. thanked His Royal Highness for supporting the Pitch@Palace UAE and GCC, by providing youth with timely advice and guidance to start their dreams and achieve success in their businesses.

H. H Sheikh Abdullah, along with The Duke of York, toured the Khalifa Fund Innovation Oasis exhibition held on the sidelines of event and met with the Entrepreneurs supported by the Fund and its local partners. His Highness discussed with them their ideas and ambitions, providing them with timely advice.

HRH The Duke of York said; “It is an enormous pleasure to be here at Pitch@Palace GCC. Pitch has been expanding in this area for two years to include other members of the GCC. I believe very strongly that enabling entrepreneurship is a team effort. We need to build a community that gets behind and encourages these startup businesses, and working with colleagues here makes our job easier. Pitch works for entrepreneurs in a country, with the county, to give them that doorway to help their business move forward.”

He added: “The one thing that makes more of a difference than anything else are the connections that you – the Audience – can make. You’re going to have a ‘lightbulb moment’ when you realize exactly who you can put these businesses in touch with. All of you can make an enormous difference to these businesses when you make that serendipitous connection.”

Hussain Jasim Al Nowais, Chairman of Khalifa Fund for Enterprise Development, commended all local, regional Entrepreneurs of this year’s Pitch@Palace competition, which has become a frontrunner in promoting innovation, creativity, and entrepreneurship.

He said: “Ever since the launch of Pitch@Palace UAE last year, we have been able to achieve tremendous success in encouraging Emirati youth to become entrepreneurs. We owe our thanks and gratitude to our wise leaders, His Highness Sheikh Khalifa Bin Zayed Al Nahyan, the President of the UAE, and His Highness Sheikh Mohamed bin Zayed Al Nahyan, Crown Prince of Abu Dhabi and Deputy Supreme Commander of the UAE Armed Forces, for their continuous support and encouragement. The competition provides the perfect platform for innovation and creativity to flourish. It also encourages our young entrepreneurs to dream big and benefit from global exposure and exchange of experiences.”

Al Nowais pointed out that since its establishment, Khalifa Fund has taken upon itself the responsibility of supporting and developing small and medium enterprises (SMEs) as well as instilling a culture of entrepreneurship in UAE society in an effort to empower the young generation and strengthen their leadership skills.

He added: “Khalifa Fund has been a major contributor in promoting the Emirate of Abu Dhabi as a leading global hub for innovation and projects that rely entirely on advanced technologies. Right from inception until today, we have approved more than 1,400 projects with loans equaling AED 1.66 billion. The successful projects financed by the Fund exceeded 80 per cent. We conducted over 800 targeted campaigns that attracted more than 18,000 Emiratis to avail of its services. The Fund’s specialized team provided timely advice, guidance and training to over 8000 Emiratis, of which over 60 per cent were women. While start-ups accounted for 79 per cent of approved projects, and 21 per cent were growth. Over 8 per cent of our active portfolio are exporting and more than 10 of our projects are now being franchised, which indicates a doubled investment rate and the success of the fund in supporting young local entrepreneurs to think creatively and harnesses new technologies, Artificial Intelligence and robots to serve fellow human beings and their homeland.”

The winners will be able to participate in Pitch@Palace Global 2.0 and showcase their innovative projects at St. James’s Palace in London this December. Entrepreneurs from the UAE and the Gulf region will be given an opportunity to present their ideas before an elite group of businessmen, investors, and high-level company executives, hosted by The Duke.

Sight-saving software among the winners of Pitch@Palace

An inventor who designed sight-saving technology after his grandfather went blind is among four aspiring entrepreneurs who won the chance to promote their business to a global audience.

Saif Al Darmaki won over a crowd of leading business figures by telling them he wanted to help the “forgotten millions” who have sight issues.

He was among four young entrepreneurs named as the winners of the Pitch@Palace GCC competition, held at Emirates Palace in Abu Dhabi on Wednesday night.

They will go on to the global final in London in December.

The Pitch@Palace initiative, was founded by the UK’s Prince Andrew, Duke of York, to encourage innovation, and he attended the Abu Dhabi event.

Another successful candidates was Hala Sulaiman, who said she wanted her company, an educational programme that translates Arabic text to audiobooks, to become the “Audible of the Arab world”.

On 28th November, 2016, His Royal Highness The Duke of York and His Highness, Sheikh Mohammed bin Zayed Al Nahyan, Crown Prince of Abu Dhabi and Deputy Supreme Commander of the Armed Forces attended the launch of Pitch@Palace UAE event in Abu Dhabi. Khalifa Fund for Enterprise Development was selected to be the strategic partner of this prestigious international competition in the Gulf Region.

Following the celebration of the launching of this initiative, His Highness Sheikh Mohammed bin Zayed Al Nahyan, Crown Prince of Abu Dhabi and Deputy Supreme Commander of the Armed Forces, said, “We welcome such qualitative and creative initiatives that will enhance the possibilities and capabilities of Entrepreneurs and give them the opportunity to benefit from prestigious international expertise in various fields.” His Highness thanked The Duke of York, for launching this initiative.

His Highness added the drive by UAE to diversify its economy and create an innovation based culture to reduce dependence on oil resources has been the direction given by the father of the nation His Highness Sheikh Khalifa Bin Zayed Al Nahyan. Following this direction UAE can now boast global recognition in terms of economic growth and prosperity. His Highness also pointed out the critical role Khalifa Fund has played in cultivating a culture of Entrepreneurship, capacity building of national Entrepreneurs, funding start ups and supporting the transition to a knowledge based economy.

A word from the Duke of York

It is a tremendous honour to be partnering with Sheikh Mohammed bin Zayed and The Khalifa Fund to deliver Pitch@Palace UAE.

His Royal Highness is very pleased to bring the unique formula to the UAE and to partner with Sheikh Mohammed, together they are committed to developing entrepreneurial activity. The Duke of York wishes all potential Entrepreneurs in the UAE and more broadly in the GCC every good fortune and encourages you to apply to be part of Pitch@Palace.